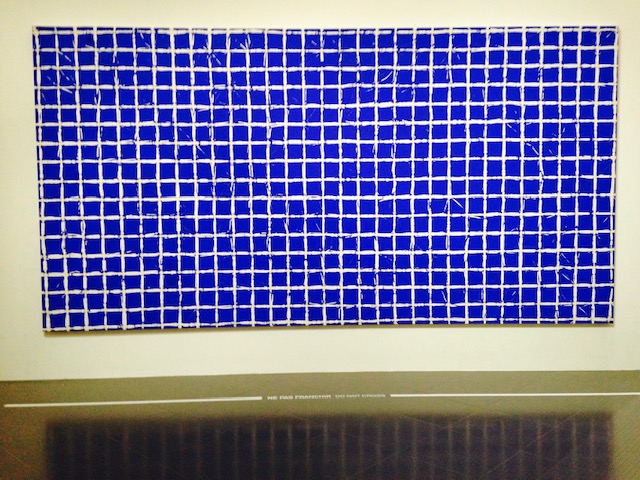 “The six paintings exhibited, from the private collection of the Gandur foundation, now a partner of the museum, represent part of the artist’s work, between 1951 and 1962.” We can clearly see the evolution of the canvas painted until ‘at the first folds, which will become the major expression of Simon Hantaï ”, describes Sylvain Amic, the director of the Réunion des musées métropolitains. After a brief stint with the surrealists, questioning the place of the abstract in the movement, Simon Hantaï will effectively develop his own research for a very gestural painting, then more and more blind using the natural folds of the canvas. “Young painters then referred to him. They talked about it as their spiritual master, like Buren, “said Daniel Hantai, the artist’s son, present for the inauguration. ”

Regarding Hantai, I can only recommend reading the chapter by Daniel Sibony Psychoanalyst: “The notches of the other light” in his book FANTASMS OF ARTISTS from which I deliver some extracts.

“You present yourself in life in a clear and innocent way, like a big white canvas, and the meeting of the other or the event crumples you … then you find yourself flattened, not crushed, but more or less put in dish; then you’re exposed to different lights … finally, after a certain time, you begin to straighten up, unfold, unfold, as if under the effect of resilience, a call to life; then you enter the field of Hantaï, you are in the image of one of his works. “

“To assert oneself in one’s very breaking is one of the secrets of humans. Most assert themselves in spite of themselves, rarely by themselves, others ignore that they are broken, it is the cleavage. Here, it is a luminous affirmation not of oneself but of a self in dialogue with its other; the other is the repressed which returns but which is white: its existence suffices, and above all its return, which carries the rest and makes it more radiant. ”

“It is clear that between folding and unfolding, it is a vast interaction, a dynamic and subtle in-between, full of random burrs that remind us of life. Between the whites of the repressed that returns and the colored forms, the third that stands out is the work itself, the Canvas. ”

“Hantaï compares to Rothko in the impulse of the process: to make the light of being or the being of light burst, in beauty. “

“Let’s come back to the fantasy of Hantai. In a film about him, he explains his childhood fascination with his mother’s aprons, for their metamorphosis as they are washed and ironed. And he quotes his mother saying: “When it’s done well, work, you can take the apron, you look at yourself, you see yourself as in a mirror. So would he have folded-unfolded, his mother’s “outfits”? his clothes, his habits or his folds? Now that can speak to analysts. Is white the hidden part of the mother, her nakedness? who comes back in force to carry the essential dialogue with light? It brings us a little closer to what would be his fantasy. Already the major gesture of his painting _ folding the canvas before painting_ means: acting out the existence of the repressed … .. It is a way of respecting the existence of the forbidden: he refrains from see parts of the canvas, parts that are hidden, then suddenly revealed, when the painter, passing under the canvas as in a tent, or as a child under the skirt of a cosmic mother, comes out to see better, with us, the wonder of the repressed which is even visible. This white man who comes back to structure the whole thing, we perceived it as the nudity of the mother. It’s hard not to think of Oedipus, who blinds himself to having seen and even to have enjoyed it, of these hidden parts of the mother. The artist, drawing on the richness of the light, valiantly tackles the “folded pile” to emerge victorious from the test. “